An Evening with Rick Mercer

Earlier in the fall I was lucky enough to snag 4 tickets to the taping of the Rick Mercer Report.  So Friday arrives and it's just one of those days...you know the kind I mean.  I think any one of us could have said let's forget it and just stay home and we would have.  So the girls put their studying away for the evening (exams next week) and we get in the van (albeit 1/2 an hour later than originally planned) to drive downtown to meet Al.

So apparently the snow came in earlier than forecasted.  We were driving a whopping 40 clicks down the DVP and you could barely see in front of you.  Finally we drive out of this snow squall to almost bare roads. (So strange when that happens.)  The Gardiner was backed up from Yonge to the 427 - ok that's quite a back up - so I scooted underneath to the Lake Shore.  This was a good idea but somehow I missed the Spadina exit.  I feel like I know my way around Toronto fairly well but not on Friday night I guess.  It was dark, snowing, the lights were reflecting off the windshield and there were lots of pedestrians scurrying to get home. Cars were blocking the intersections and pedestrians were running across against the lights.  Bedlam I would like to call it.  I was the first car turning left onto Spadina and all of the sudden I realize I'm on the designated streetcar right away.  Mild panic as I manoeuvre my way off the oncoming track to the northbound and then off - "girls we're going to feel a 'bit' of bump now" onto the road again.  Accident thwarted we were close to our destination.  Late and shaken we only have time to grab a bite of dinner in the food court that was quickly shutting down.  We're going fancy tonight...Mickey D's. 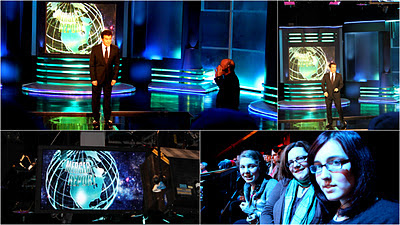 It was all worth it though.  They whisked all 400 of us up the elevators to the 10th floor studio and like a well oiled machine we were all in our seats in minutes.  Rick came out to welcome us and the show began.  It took less than an hour to tape the whole thing with comments and jokes in between from Rick.   It was a lot of fun for all four of us and the laugh that we all needed. 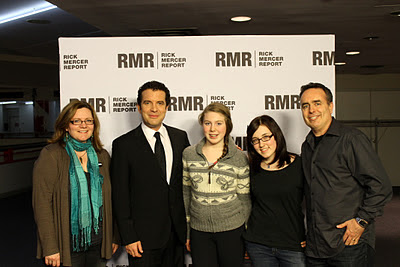 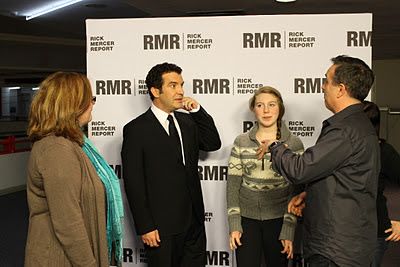 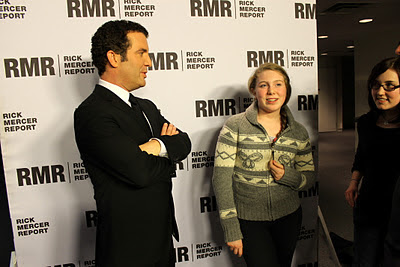 It was fun to meet him after the show.

There were lots of funny bits in this week's episode but the 'commercial' for the forehead/smile tape really caught me funny.  If you get a chance watch it on Tuesday, 8p.m., CBC.

To cap it off on our way back to the parking garage we stopped in Second Cup.  We found out they were closing but they treated us to free lattes and hot chocolate.  How nice and unexpected! A perfect way to end the evening.
Posted by Nancy at 10:17 AM