The (Mis) Adventures of Chippy

Monday morning while sipping on a coffee at our kitchen table, and peacefully working on the computer, I noticed something running by in our backyard.  When pulling back the curtains I saw a cat.  There are very few cats running at large in our neighbourhood and of the ones I had seen this one was unfamiliar.  He was a scruffy one with a snarl on his face and he glared right at me.  Ok. maybe he didn't have an actual snarl on his face but he definitely was scruffy and I'm almost positive he glared at me.  He was preoccupied with something in our garden and then all of a sudden he sprang into the cedars and shrubs.  I was quite horrified thinking he was after one of our birds.  I knew the mourning doves regularly sit in the garden back there.  When he emerged from the shrubbery it took me a moment to realize it was not a bird but a small animal....on no a chipmunk. It's Chippy!   The strange, guttaral sound coming from my mouth startled the cat and he dropped Chippy. I was sure he would be dead but after a few seconds of shocked stillness he scrambled off into the neighbour's backyard. 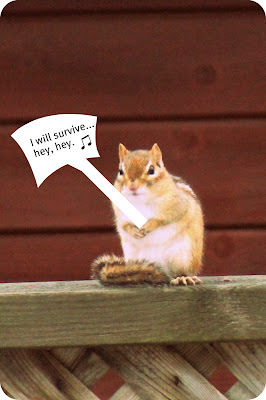 I watched and searched for him throughout the day.  I was sure I was going to stumble upon him lying in the garden bleeding or worse. Tuesday came and almost went with no sign and then last night at dinner a familiar friend showed up.  Springing around and popping in and out of his chipmunk hole.  He looked good and I sensed his new fresh outlook on life.  Chippy would definitely stop and smell the roses this week...as would I.

Email ThisBlogThis!Share to TwitterShare to FacebookShare to Pinterest
Labels: cats, chipmunk, garden, I Will Survive