The Moose are Loose in Newfoundland

With an expanding population of over 150,000 moose on the island you wouldn't think it would be too hard to spot one. Funny enough though when you are looking for them you don't see any for miles and miles.  We had to see one - it was on 'the list' - and we had already crossed off whales and icebergs.

Our first moose sighting was on the road into L'anse aux Meadows.  A baby, or perhaps better described as a  teenager moose, was there and he was very active. Running back and forth and playing (which I have never seen).  We were all thinking that his mom must be around and next we spotted her coming out of the brush.  It was quite a sight to see the teen running around and back to his mom and then running back again.  It reminded us of our dog who every now and then gets a spurt of overcharged energy and runs like a maniac around our main level. 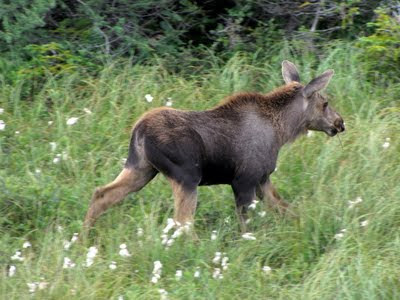 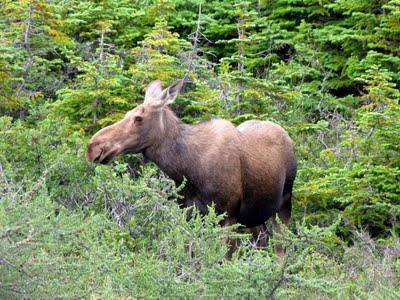 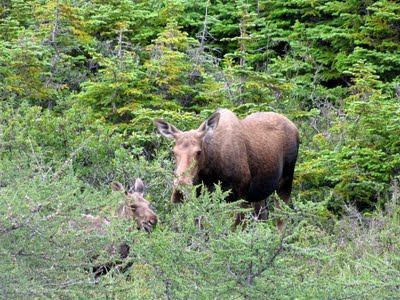 Our second sighting was a day or two later in Gros Morne just north of Western Brook Pond.  A mom with twins. Which was quite exciting to see together, however they refused to be in the same picture.  Sibling rivalry already! 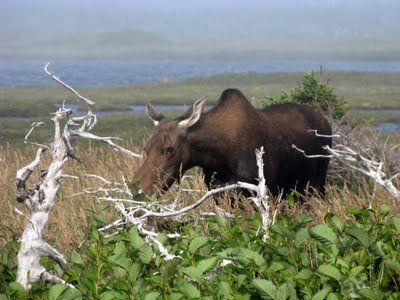 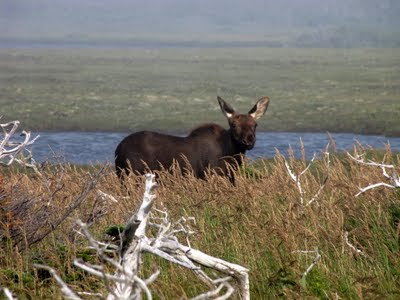 In the daytime, and off the road, it's exciting to see them but moose are a real hazard for night time driving. We only drove once at night and it was a tense drive with fog and mist coming off the ocean and no lights on the highway.  Luckily we only spotted one ourselves as his eyes reflected in our headlights and he was safely off to the side of the road...although we did have the feeling that they were lurking in the brush and snickering as we drove past! Mainlanders!
Posted by Nancy at 10:08 AM